Caldo verde is a traditional Portuguese soup made with thinly-sliced collard greens, potatoes and linguiça (smoked Portuguese sausage). This creamy, one-pot soup contains no dairy or gluten! Serve as a starter before a large meal or on its own for lunch or dinner. Vegetarian/vegan instructions included!

One thing that Portuguese-speaking cultures have in common is our love for cozy soups! Much like canja, caldo verde is the perfect comfort food for a cold, rainy day or when someone in your household is feeling sick.

Why you’ll love this recipe

This recipe in particular, resembles Caldo Verde in its most simple and traditional form. It starts with base of sauteéd onions, water and boiled potatoes.

As the potatoes simmer, they break down and form a creamy broth, which can then be pureéd to thicken the soup even more. Thinly sliced collard greens are then added to the pot with slices of linguiça.

Origins and history of caldo verde

Caldo Verde originated in the Minho province (northern region) of Portugal in the mid-15th century. Today it’s one of the most famous Portuguese comfort foods.

Because of its popularity in other Portuguese-speaking countries like Cape Verde, Angola and Brazil, there are many variations of caldo verde.

What does ‘caldo verde’ mean in English?

Caldo verde means ‘green soup’ in Portuguese. It’s given this name because of the green tint that comes from the collard greens.

Should I use kale or collard greens to make caldo verde?

Traditional caldo verde uses collard greens. Collards have a smoother, softer texture and more mild taste than kale. You can use kale as a substitute but I recommend using collards.

In the United States you’ll often see Portuguese Kale soup listed on restaurant menus. This appears to be a variation of this dish or a completely different dish altogether as tomatoes and beans are often added.

Step 2: Peel and dice the potatoes

Step 3: Saute the garlic and onions

Step 4: Add the potatoes and boil them

Tip: the puree should resemble mashed potatoes. It’s ok if some onions get transferred to the food processor.

Refer to the photos below for a visual.

Tip: Hold off on adding the salt and pepper for now, since we haven’t added the linguiça yet.

Step 7: Add the collard greens and let the soup simmer

Step 9: Adjust the seasoning and add the potatoes

Store any leftover caldo verde in the refrigerator for up to 3 days in an airtight container or freeze for up to 3 months.

Reheat the soup in a pan over low heat. If it’s too thick, add a little water or chicken broth to the pan to thin it out. Make sure to stir occasionally as you warm it up so it doesn’t stick to the bottom. 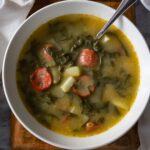 Caldo verde is a traditional Portuguese soup made with thinly-sliced collard greens, potatoes and linguiça (smoked Portuguese sausage). This creamy, one-pot soup uses pureéd potatoes as a base, so it’s naturally dairy-free and gluten-free! Serve as a starter before a large meal or on its own for lunch or dinner.

A few safety tips to keep in mind: