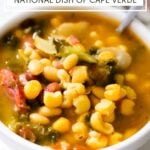 Cachupa is Cape Verde’s national dish. It’s a rich stew of hominy, beans, seasoned meats and vegetables. Every family has their own version, and even within families, there are different variations.

Interested in learning to make other Cape Verdean dishes? Make sure to check out this list of 25 Cape Verdean foods! Each dish has a link to the recipe!

Normally, we make enough cachupa to feed an army. It can be tricky to scale that amount down if you live in a small household though. When I first started making cachupa on my own, I lived by myself and I really struggled to make just enough to fit in an 8 quart stockpot. The first few times, my pot was nearly overflowing!

This recipe is scaled down enough to feed about 8 people. I know that still seems like a lot, but it’s nothing compared to the industrial-sized pot that my grandmother, Mamá makes. Cachupa takes a long time to cook! Like 4-5 hours long! It just doesn’t make sense to spend all that time on a dish where everyone only gets one helping each. Plus you’ll want to have some leftover to fry for breakfast the next day (we call this “cachupa guisod”).

A few words about my family

Mamá and my dad are cachupa purists, and stern critics. You best believe I got sign-off from them before I published this post! If my recipe didn’t measure up, I would have went straight back to the test kitchen. All three of us have our own versions that resemble each other’s pretty closely.

My version resembles Mamá’s more, since she uses whole kernels of hominy, and doesn’t put potatoes in hers. My dad is less picky and will use either whole kernels or samp (cracked hominy). Potatoes are ok with him too. The more vegetables for him, the better. I don’t have a huge pot, so the fewer ingredients for me, the better.

This topic is so controversial that I initially promised myself that I would wouldn’t touch it with a 10 foot pole. But I changed my mind, because it’s healthy discourse, and if you landed on my site, you could have been searching for either. This is a safe place, I promise!

Cachupa vs. munchupa seems to be generational debate. In my family, we exclusively call it cachupa. In Cape Verde, cachupa is the only name that is used, regardless of which island you’re on. People who were raised in Cape Verde (and many 1st generation-ers) sometimes cringe when they hear the word munchupa.

On the other side of the debate, some Cape Verdeans whose families have been in the U.S. for generations, say munchupa. That’s the name of the dish that’s been used in their families for generations.

Regardless of whether you’re Team Cachupa or Team Munchupa, most people have a strong attachment to their chosen name, and a very strong stance on which name is correct. I am firm in my own stance, but at the end of the day I respect people’s family traditions. My advice? Call it what you want and get on with your life. Problem solved!

Here’s a quick look at the main ingredients grouped by category:

While there are versions of cachupa in Cape Verde that are meatless, or that use fish, meat is usually a staple in cachupa. I use meat because it’s rich in flavor. Some people go heavy on the meat, I don’t, but feel free to use more or less depending on your preference.

Corned beef, salt pork and chouriço are the 3 types of meat that I use, and they’re all seasoned the night before. Pork ribs are also commonly used, although I don’t use them in my recipe.

I recommend trimming and discarding the fat from the corned -beef before seasoning it. Cut the salt pork in large chunks and leave the fat attached for flavor. It will come off during the cooking process and can be fished out easily. I discard the fat right before I add the vegetables to the pot.

Cachupa is a corn and legume-heavy dish. Hominy (dried corn) is the main ingredient and beans always accompany the corn. I use a combination of dried cranberry beans, feijão pedra (translates to “rock beans”, and white lima beans. I use whole kernels of hominy (shown in both photos below), but samp, which is the cracked version of dried hominy can also be used. Growing up, my family always used samp to make cachupa but Mamá started using the whole kernels once Cape Verdean ingredients became more widely-available in the U.S.

Using dried beans is a must, because the starch that comes off of the beans while cooking helps to thicken the stew. Cachupa is intended to simmer for a long period of time and canned beans won’t hold up in this dish.

If you have a hard time finding feijão pedra (rock beans), a good substitute is navy beans. Pink beans (frijoles rosados), or small red kidney beans are good substitutes for cranberry beans if need be. You shouldn’t have much difficulty finding the fava beans (aka large white lima beans), but during a pandemic, anything is possible! If worst comes to worst, you can skip the fava beans altogether.

Root vegetables are used cachupa, since they’re a staple in Cape Verde. I personally use yuca, but sweet potatoes, squash, and carrots are all good additions and are often used in combination with each other. I only have an 8 gallon stock-pot, so I don’t add too many root vegetables. One medium-sized mandioca (yuca) is all that is needed for me.

I cut the mandioca into 1 and ½ inch rounds and then cut the rounds in half, remove the peel and then cut each half round into 2 (I hope that makes sense!). Mandioca is a hard vegetable to cut through so make sure to use a sharp knife and safely apply pressure. Use a wooden cutting board! The peeling shouldn’t be too hard once you’ve cut the rounds in half. There’s a faint line where the skin meets the flesh of the yuca. Place the knife under the skin to loosen it from the flesh.

Greens also give cachupa great flavor! Collard greens are by my far my favorite and what I recommend. Kale is also a good option and is what is pictured below. I didn’t have collard greens on the day that I shot these photos. Cabbage is another tasty option. If someone tells you that people don’t put cabbage in cachupa, you can kindly let them know that’s false.

The great news is that you don’t need to run out and buy any special seasonings for this dish. Crushed garlic, yellow onions, smoked paprika, a bay leaf, salt, pepper and a bouillon cube or 2, are all you need for this recipe.

Depending on the meats you use, you can go pretty light on the added salt. Cured meats like salt pork and chouriço often contain high amounts of salt. Another thing to keep in mind is that the flavors in cachupa build slowly because you add the ingredients at different stages. If you add too much salt at the beginning you could end up with an overly-salted dish.

I start off by using 1 bouillon cube in the beginning stage of cooking and then adding another one near the end if I feel like the cachupa needs more flavor.

The full recipe is below so I’m just going to keep this very high level. Cachupa takes about 5 hours to make.

Now let’s eat with our eyes!

Did you know that we make our signature breakfast dish with with reheated leftover cachupa? Some people enjoy this reheated version of cachupa refogado the next day with a fried egg.

Love this recipe? Please leave a 5-star 🌟🌟🌟🌟🌟rating in the recipe card below & consider scrolling down and leaving me a review if you REALLY liked it. Thanks! 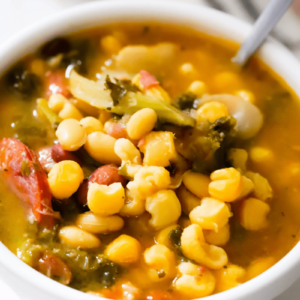 *You can cut the beef brisket into bite-sized chunks or into rib-sized pieces. Do whatever your preference tells you to. *White hominy or a mixture of yellow and white can be used (yellow and white are not packaged together). There is no difference in taste between white and yellow, I just like the color of the yellow.