Interested in learning to make other Cape Verdean dishes? Make sure to check out this list of 25 Cape Verdean foods! Each dish has a link to the recipe!

This recipe for Cape Verdean tuna pastel uses store-bought empanada discs. Store-bought discs are a common staple in Cape Verdean households. Some people make the masa (dough) from scratch, but it’s not common-practice since pastel is usually made for large gatherings.

Eventually I’ll update this recipe with directions to make the masa from scratch. In the meantime, please don’t lose any sleep over using store-bought discs! In my opinion, homemade dough is much more work, with not much added benefit in terms of taste.

Other versions of pastel

Cape Verdean pastel is one food that you can pretty much put whatever you want in, much like empanadas. Truthfully, though I’ve never had pastel filled with anything else besides tuna! When people refer to pastel in the context of Cape Verdean food, you can assume it will contain tuna.

Pastel de milho, is the only other variation of pastel that I have eaten. Pastel de milho is also filled with tuna, but rather than the traditional dough made from flour, the dough is made from corn flour (milho is the Portuguese word for corn). I’m still learning the technique for this version but I’m committed to publishing a recipe for Cape Verdean pastel de milho in 2021!

If you think you’ll be scoring brownie points by using fresh tuna, think again! We Cape Verdeans are super-proud of our canned tuna! In fact, I highly recommend using Cape Verdean or Portuguese canned tuna to make this pastel recipe.

Canned tuna from Cape Verde and Portugal have a distinct saltiness (this is a good thing) and they’re canned in olive oil, which also enhances the taste. If you don’t have access to these types of tuna, any quality canned tuna will do. My recommendation is to find tuna that’s canned in olive oil.

Depending on how many pieces of pastel you plan to make, it might be more cost-effective to use American tuna. Although it’s not my preference, I’m also not paying for your groceries, so I would never discourage anyone from using what they have. My grandmother uses American tuna and she makes the best pastel! Don’t feel stuck if you cant get your hands on imported tuna!

How to make Cape Verdean pastel:

Step 1: Season and cook the tuna

In a large skillet, saute the diced onions in olive oil. Drain your tuna and add it to the skillet with the sauteed onions. Use a wooden spoon to break up the tuna in the skillet before adding the spices so that the seasoning is distributed evenly.

Just like with any other Cape Verdean food, we’re using very simple seasonings. Salt, pepper, garlic powder and paprika are all you really need. sazon or annatto are optional seasoning that give the tuna some additional color.

Once you’ve added the seasonings and cooked the tuna for about 5-10 minutes (you want the moisture to dry out), turn the flame off. I like to stir in some fresh chopped parsley after cooking the filling.

Assemble each pastel one by one. I’ve been told that this recipe is very generous with the tuna! It’s easier to be generous when you’re making a small batch! Place 2 tablespoons of tuna on the center of each disc.

Fold each disc over and seal the edges using the tines of a fork. Make sure to press both sides (front and back) of each pastel.When using store-bought discs, I dampen the edges by dipping my finger in water to make the dough easier to press and seal.

If you’re a pro pastel-maker you may be able to assemble them quickly but if you’re just an average-Jane like me, a batch of 20 should take about 20-30 minutes. I spend about a minute to a minute and a half assembling each pastel.

After all of the pastel have been assembled, heat 1 cup of canola or vegetable oil in pan or skillet with deep sides. I like to shallow fry my pastel, but you’ll need to use enough oil to allow the pastel to float so that the dough doesn’t tear. One cup is the minimum amount of oil that I’ll use.

Once the oil is hot enough, (a thermometer reading of about 325°F is what I aim for, or you can test the temperature with a few drops of water to see if the oil sizzles) drop in your pastel and fry in batches of about 4 or 5 at a time. Fry the pastel over medium heat just until golden brown.

Transfer the fried pastel to a cooling rack or a paper towel lined baking sheet. My preference is to cool them in a single layer but they shouldn’t get soggy if you pile them on top of one another (I’ve done this many times).

Can I use an air-fryer to make Cape Verdean pastel?

While I prefer to fry my pastel in oil, you can use an air fryer. Each air-fryer is different, but 7 minutes per side should be sufficient. If you’re going to use an air-fryer, I recommend brushing each pastel with a small amount of oil or spraying them with cooking spray.

One consideration to bear in mind when using an air-fryer is time. Depending on the size of your air-fryer basket, it could take quite a bit of time to fry a big batch of pastel.

When and how to serve Cape Verdean pastel:

The great thing about pastel is that it can be eaten at any time of day! I like to eat them as an afternoon snack (no way I’m making a fresh batch in the morning!), but I do also like to re-heat them for breakfast. Pastel re-heat very well in the oven.

Normally pastel de atum is not served with a dipping sauce, but I like to bite into my pastel and add a few drops of hot sauce to the center. You can also season the tuna with a few drops of hot-sauce before assembling and frying the pastel.

How else would I show you the inside without taking a bite?

Look at that fluffy soft tuna and crispy golden shell! These would make anybody’s mama or vovo proud!

Until next time, friends! 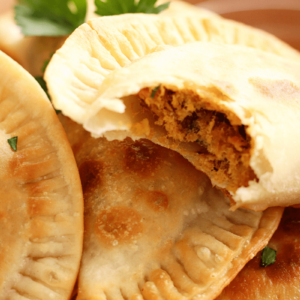 Assemble and fry the pastel:

Pastel can be stored for 1-2 days at room temperature in a ziploc bag or plastic container. Pastel can be baked instead of fried at 375 degrees F for 18-20 minutes. Brush with egg wash or spray with cooking spray so that they turn golden in color. Leftover tuna can be refrigerated for 2-3 days. You can substitute regular, American tuna for imported if needed. Try to find tuna packed in olive oil.

Calories: 300kcal
Tried this Recipe?Let us know how it was!
« ‘The Best of Both Worlds’ Chocolate-Chip Cookies
Sweet and Tangy Coleslaw Recipe »
1.7K shares