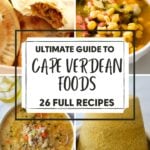 Cape Verdean food is a collection of rich, hearty and flavorful dishes made from staple ingredients like fish, pork and corn. Our cuisine is an array of mostly savory dishes that contain both West African and Portuguese influences. Here are 25 traditional Cape Verdean foods with a link to each recipe!

This list contains Cape Verdean favorites like cachupa, canja and pastel as well as some of the less-talked about dishes!

Where is Cape Verde?

Cape Verde (Cabo Verde) is a ten-island archipelago, located off the west coast of Africa. Cape Verde was colonized by Portugal in 1462. It was used as a slave trading port until slavery was fully abolished in 1878. Cape Verde remained under Portuguese rule up until 1975, when it finally gained its independence!

Today, Cape Verde is officially part of Africa. Portuguese is still spoken in schools and is the language used to conduct business, but the primary spoken language is Criolu (also spelled Kriolu).

Cape Verdean cuisine is made up mostly of savory dishes, but we love our sweets as well! Our food combines Portuguese and West African influences. Many of our dishes are slow cooked and made from staple ingredients like corn, rice, root vegetables and grains. We rely heavily on the use of pork and fish in our cooking!

Anyone who’s familiar with Cape Verdean food knows that measuring is almost not a thing and many of our recipes are passed down from memory and word of mouth. For this reason, there’s much debate about what makes a dish authentically Cape Verdean!

Some versions are thicker, and other versions contain more broth. Because it yields so much, it’s the perfect dish for gatherings and special occasions!

Cachupa refogada is the breakfast version of cachupa. Also known as Cachupa guisada, this signature breakfast is made from leftover Cachupa that’s been drained and re-heated in a hot skillet. A fried egg is placed on top to finish off this most beloved Cape Verdean breakfast dish!

The dry ingredients are moistened with water and steamed in a binde, which is a traditional Cape Verdean clay pot. The cuscus is steamed on the stove top and served for breakfast with butter, honey or milk.

Canja is the mother of Cape Verdean comfort food! It’s a rich and delicious chicken soup that’s made from rice and chicken, and simple seasonings. Some versions contain carrots and potatoes that are diced very small.

Canja is often associated with feelings of nostalgia and comfort due to its healing properties. It’s the go-to dish for somber occasions or when someone is sick, but really can be eaten for any occasion!

Pastel are fried pastries that are filled with savory tuna, and deep fried until they’re golden brown. They’re undoubtedly the most popular Cape Verdean finger food!

Pastel are made in large batches and often served at parties. When I make them, I usually scale the quantity down to about 20 pieces.

Caldo de peixe is traditional fish stew made from saltwater fish, bananas, and root vegetables in a flavorful broth. It’s made using the entire fish, including the fish’s head and tail.

Don’t be fooled by the simplicity of this dish! It’s one of the most hearty and satisfying Cape Verdean dishes! It’s also relatively quick to make, unlike some of the other traditional Cape Verdean foods.

Arroz c’atum is a modest Cape Verdean dish, but also one of my most viral recipes! The name translates to ‘rice with tuna‘ and is made of long grain rice, a few seasonings and canned Cape Verdean tuna. Olives or beans can be added as well.

The best past about this dish is it’s ready in under 30 minutes!

Arroz’d fava is a very basic dish containing seasoned white rice and fava beans. Cape Verdean fava beans can be nearly impossible to find in the US. For this reason, this dish is almost always prepared in the states with frozen lima beans.

Feijoada is a dish made of stewed beans, cured meat and vegetables. It’s a famous staple dish in Cape Verde and in other Portuguese speaking countries. It’s almost always served with rice!

Cape Verdean feijoada is typically made with feijão pedra, which are labeled and sold as rock beans in the U.S. Feijão pedra have a distinctly smoky yet delicious taste. Pinto beans can be substituted if you have trouble finding feijão pedra.

Similar in style to feijoada, feijão congo is made from pigeon peas. This dish is also referred to as ervilha seca (translation: dried peas) in the northern islands of Cape Verde.

Pigeon peas have an earthy flavor and let off such a delicious broth! Feijão congo tastes delicious when served over white rice.

Modje is a famous dish that’s popular on the island of São Nicolau. It’s a rich stew that’s traditionally made with goat meat, green banana, yams, and yucca. It’s very similar in style to Dominican sancocho.

After cooking, it’s best to wait a little while before serving which allows the broth to thicken.

Brinhola are banana fritters made with mashed, overripe bananas and flour or cornmeal. They’re soft and warm in the center and slightly crispy on the outside.

Brinhola are often served for breakfast with reheated rice, eggs, some type of protein and coffee.

13. Linguiça with eggs and rice

Linguiça is a cured pork sausage that’s slightly spicy and is usually added to stews or eaten at breakfast. This version of linguiça shown above, is simmered in a tomato-based broth with onions and peppers, and is often served at breakfast.

Banana frita, is the Cape Verdean version of sweet fried plantains. They’re soft and sweet with crispy edges and served as a side at breakfast.

Ripe plantains are a must for this dish! Look for yellow plantains with black spots for the best results.

Rissois are made from homemade massa (dough) and are dipped in egg and breadcrumbs before frying. Check out both recipes for shrimp rissois and tuna rissois!

Fungine are beloved log-shaped fried pastries that are made from a mixture of cornmeal and potato. The ones shown above are made with sweet potato! They’re warm and sweet and often served with coffee or as a finger food at parties.

Bacalhau com grao de bico is a dish made of dried, salted cod fish, chickpeas, potatoes and eggs. It’s assembled almost like a casserole and served with olive oil and vinegar on the side.

This dish is prepared by soaking the cod in water overnight , and then placing it in a bath of boiled water the next day.

Caldo Verde has Portuguese origins but adapted versions are eaten throughout Cape Verde. Americans often refer to Caldo Verde as kale soup, but it’s actually made from greens that are more similar to collard greens!

Cape Verdeans prepare Caldo Verde much like the Portuguese but sometimes add beans.

Camarão (shrimp) Mozambique is said to have originated in Portugal but a main component of the dish is piri-piri which is an African pepper. The dish is popular in Cape Verde and other Portuguese speaking countries!

The shrimp is simmered in a bold garlic sauce that’s made with beer, high quality seasonings and a dash of hot sauce. White rice or fried potatoes are traditionally served with this quick and easy 30 minute dish!

Carne de Porco à Alentajana is Portuguese in origin but is a very popular dish often served at Cape Verdean gatherings and restaurants.

It’s made from tender cubes of pork, crispy fried potatoes and littleneck clams simmered in white wine sauce. Olives, jardineira (medley of pickled vegetables) and fresh cilantro are arranged on top as garnish.

Bitoque is another dish with Portuguese origins but is also eaten throughout Cape Verde. It’s a lean steak topped with a fried egg and pan sauce. It’s often served with white rice and fried potatoes, and is very popular in Cape Verdean restaurants.

Ponche is a cordial made from grogu, which is Cape Verde signature liquor that’s made from distilled sugar cane. It’s made by combining grogue with molasses, honey, or coconut.

Ponche is often reserved for special occasions, holidays or gatherings. Here’s my recipe for coconut ponche!

Pudim is the Cape Verdean equivalent to flan and is made by blending eggs, milk, sugar and vanilla extract together and baking it in a water bath. Pudim has a sweet taste, a smooth texture and is covered in caramel syrup.

Doce de papaia is a delicious spread made mainly from fresh papaya and sugar. You can use ripe or unripe papaya and it’s often served with bolacha (Cape Verdean cookies) or with toast or cuscus!

These Cape Verdean donuts are a popular treat in Cape Verde! They’re made with flour, milk and eggs and leavened with baking powder. Donetes are often coated in a caramel or a plain sugar syrup and topped with flaked coconut.

Doce de leite is a sweet, caramelized dessert that comes in 2 forms. Traditional Cape Verdean doce leite is made from milk curds and sugar. It’s eaten as a spread with bread, cookies, crackers and was invented as a means to use up milk that had spoiled.

Modern versions of the dish use fresh whole milk which is safely curdled by adding lemon or lime juice. There’s also a smooth and creamy version that’s popular in Brazil and other parts of Latin America.

Don’t feel like cooking? Here are a list Cape Verdean restaurants that you can support that are based in the United States!