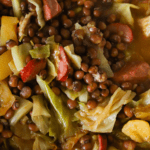 Feijão congo (also known as ervilha seca) is a Cape Verdean dish made from dried pigeon peas, stewed in a rich and savory broth. Similar in style to feijoada, this stewed pigeon peas recipe has linguiça, cabbage and squash added. White rice is traditionally served on the side.

Like most Cape Verdean foods, this style of stewed pigeon peas has a few different names. In Sao Nicolau (where my family is from) we call stewed pigeon peas ervilha seco, which translates to dried peas. In the southern islands of Cape Verde, stewed pigeon this dish is commonly referred to as feijão congo (which means congo bean, another name for pigeon pea).

I’ve always been a huge fan of ervilha seco, even as a child. I remember surprising the heck out of my elders when I requested stewed pigeon peas as a child as legumes are not always popular with children. My tastebuds were clearly beyond their years.

What are pigeon peas?

Pigeon peas are actually beans (despite the name) and are a staple in African and Latin American cooking. Pigeon peas are small, smooth and round, and have a smoky flavor.

As we already touched upon, pigeon peas are referred to as ervilha seco or feijão congo in Cape Verde. Within the African diaspora, pigeon peas have a few other names. They’re called gandules in Puerto Rico (check out a similar stewed peas recipe here), gungo beans in Jamaica and pwa congo in Haiti. This is not a complete list, but gives you an idea of how widely pigeon peas are eaten.

For this particular recipe, we’ll be using dried pigeon peas. Growing up in a Cape Verdean household we rarely (if ever) used canned beans. Dry beans are a staple in modern Cape Verdean cooking.

If you would like to use canned pigeon peas for this recipe, go ahead, you’ll just have to shorten the cooking time to about 20 minutes. I also would start by boiling the squash first, to avoid overcooking the peas.

Where to buy pigeon peas:

Depending on the demographics of your area, you may be able to find dried (or canned) pigeon peas in your local chain-supermarket. If you don’t live in a place that has an African, Caribbean or Latin population you may need to visit a market or grocery store in an area that does.

Inspect the pigeon peas, and discard of any broken pieces or pebbles. Place the pigeon peas in a medium-sized bowl and cover them with a few inches of water. Soaking pigeon peas is super-important not only because it shortens the cooking time, it also ensure that the peas cook evenly.

Cube the salt pork into 1-inch pieces. Because the pork is already salted, you don’t need to pre-season it. Be advised that salt pork contains an ample amount of salt already, so you likely won’t need to add any salt (besides the bouillon) to this dish.

You can also peel, remove the seeds and dice the acorn squash and chop the cabbage ahead of time, or do it while the pigeon peas are cooking.

Step 3: Sauté the seasonings and aromatics

Heat 3 tablespoons of olive oil in a 5 or 6 quart pot or dutch oven. Add the diced onions, and cook them for about 1 minute until they are clear and fragrant. Then add the garlic, paprika and cook for one minute more.

The photo below shows the bay leaves added at this stage but to keep them fully in tact, I recommend adding them with the bouillon in step 5.

Add the salt pork to the pot and let it brown on all sides. The pork will start to sizzle, get lighter in color and you’ll start to smell it. Don’t worry if you don’t get much of a sear on the salt pork, as its use is mainly to salt and flavor the dish.

Drain and rinse the pigeon peas, then add them to the pot. Add 5 cups of water, 1 bouillon cube and bring the pot to a boil. If you want to cover the pot at this point you can, I usually wait until the liquid starts to boil.

Once the water starts boiling, cover the pot with a lid and turn the flame down to the lowest setting. Let the pigeon peas simmer for 1 and ½ to 2 hours. Stir the peas and taste the broth periodically.

Pay close attention to the amount of liquid in the pot to ensure that there’s enough broth. It helps to keep a kettle of boiling water close by so that you can add more liquid as needed. The photo below gives an idea of how much liquid to maintain throughout the cooking process.

Step 7: Add the linguiça and vegetables

It’s very important to taste the broth before adding the linguiça, squash and cabbage. If the broth tastes bland at this point, drop in another bouillon cube.

Add the squash and linguiça, then pile the cabbage on top. You can add a little more water if you wish, but once you cover the pot with a lid, the steam should cook the cabbage. Let the covered pot simmer for 30 minutes more over a low flame.

Step 8: Give one last stir and serve

By this time, the cabbage should be wilted and the squash should be tender. Taste the peas and vegetables for doneness. The pigeon peas should be soft. It’s ok if some of them have split while cooking.

Give the broth a taste, it should have plenty of flavor. Use a wooden spoon to mix the pigeon peas one last time. You want to make sure that the linguiça, squash and cabbage are evenly distributed. Once satisfied with the taste and texture of the stewed peas, turn the flame off.

How to serve stewed pigeon peas:

There are a few different ways that this this recipe can be served. It can be served as a standalone meal with white rice on the side, or as part of a larger meal with some type of meat (usually chicken) as the main course.

Did you enjoy this dish? Check out some other Cape Verdean recipes: 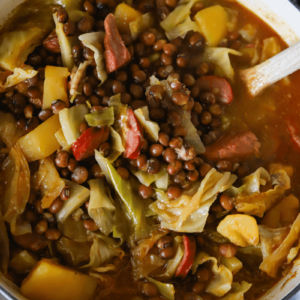 Crystal DaCruz
Feijão congo is a Cape Verdean dish that is similar to feijoada, and made from dried pigeon peas, stewed in a rich and savory broth with linguiça, cabbage and squash. White rice is traditionally served on the side.
5 from 14 votes
Print Recipe Pin Recipe
Prep Time 15 mins
Course Cape Verdean Dishes
Cuisine Cape Verdean
Servings 8 servings

Tried this Recipe?Let us know how it was!
« Easy Garlic Knots Recipe – with Garlic Butter and Basil
Linguica with Peppers and Onions (Cape Verdean Recipe) »
284 shares