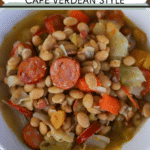 This simple Cape Verdean feijoada recipe is made of stewed beans, pork and vegetables in a rich, flavorful broth. One pot is all you need – cooks in under 3 hours! Serve over white rice, or as part of a larger meal. (This recipe calls for dry beans that need to soak overnight).

When people hear feijoada, they usually think of Portugal or Brazil, but – hello! Feijoada is also eaten in Cape Verde and throughout Africa. I’m here to put Cape Verdean feijoada on the map!

One thing about Cape Verdeans, we love our beans! Growing up, I don’t remember calling this dish by its actual name, we just called it f’jon pedra. This shortened name is our pronunciation of the term feijão pedra, which is the primary ingredient in Cape Verdean feijoada.

Feijoada is a famous dish made of stewed beans, cured meats (usually pork), vegetables and a flavorful broth. It’s eaten throughout the Portuguese-speaking diaspora, and the presentation and ingredients will vary from culture to culture.

Feijoada is not a one-size-fits-all dish! You can use whichever meats and vegetables you like. Cape Verdean feijoada closely resembles feijoada Portuguesa because of its light color, unlike Brazilian feijoada which is made with stewed black beans. Chouriço or linguiça are often used in feijoada, as well as some form of salted pork. It’s not uncommon to find versions of feijoada that use ribs, pigs feet, tripe or blood sausage.

My feijoada recipe is on the simpler side of things – it’s made with stewed rock beans, salt-pork, chouriço, carrots, cabbage, squash and a broth made from tomato and simple seasonings.

What is feijão pedra, and is there a substitute?

Feijão pedra are labeled and sold in the US as “rock beans”. They can be found easily in areas where there’s a heavy Cape Verdean population. Feijão pedra are round, light-tan in color, and have a seam along one side that sometimes comes off during cooking. They also have a distinct, almost smoky smell and taste, they soak up a lot of water and take a long time to cook.

If you can’t find feijão pedra in your area, you can use pinto beans. Pintos are commonly used as a substitute because they’re easier to find and have a more mild taste. With pinto beans, the broth will be a little thicker, but this is certainly not a bad thing!

Growing up, we ate a lot of dishes that resemble feijoada, just made with other beans. Baby lima beans are a favorite of my family’s as well as ervilha seca (pigeon peas). We don’t call any of these other dishes feijoada in my family, but the concept is pretty much the same – beans, pork and vegetables in a savory broth.

Can feijoada be made without pork or meat?

Yes feijoada can be made without pork or without meat at all. You’ll just have to play around with the seasonings to compensate for the flavor of the pork. Corned beef, and turkey chouriço or linguiça are pork alternatives. Just be careful because non-pork sausage sometimes still has pork casings.

For vegetarian or vegan feijoada, obviously don’t use meat or any animal-based stock or bouillon. Vegetable stock can be used in place of water which should help to inject some flavor.

What is feijoada served with?

Feijoada is normally eaten over white rice which really soaks up the flavors of the stewed beans. Feijoada is hearty enough to be eaten as a main dish, but Cape Verdean-style feijoada is usually served in addition to a main dish.

Feijoada is a great recipe to make for gatherings because it serves so many people and stays warm when served in a covered pot.

How to make Cape Verdean feijoada:

Steps 1 and 2: Soak the beans and season the salt-pork, let rest overnight

Soaking the beans is important because it cleans them and softens them so they cook faster. Feijão pedra are tricky – they look much smaller when dry! It’s amazing how much they expand in size and volume as they soak!

As your beans are soaking, cut the salt-pork into cubes and place them in a separate bowl. Season the salt-pork with paprika and black pepper. You’ll need a large, sharp knife to cut through the fatty rind of the salt pork. Kitchen shears can be helpful for this step. Once you’ve seasoned the salt pork, cover the bowl in plastic wrap, and refrigerate overnight. The beans can soak at room temperature – no need to refrigerate them.

Steps 3 and 4: Drain and rinse the beans and sear the salt-pork

Remove the salt pork from the refrigerator and let it sit at room temperature for a few minutes. Normally, you should pat meat dry with a paper towel before searing, but I skip this step for this recipe because I want the drippings to have plenty of flavor!

You can sear the cubed pork right in the stockpot that you plan to use for the feijoada, or you can use a cast-iron skillet for searing. Heat 2 tablespoons of high-heat cooking oil over a high flame and sear the salt-pork cubes on all sides. Make sure the oil is very hot before introducing the pork to the pan and sear the pork cubes until nice and crisp on all sides.

Step 5: Prepare the base

Return the salt-pork to the pot (make sure to also transfer any drippings) and toss the pork until it’s coated in the tomato and seasonings.

Steps 6 and 7: Add the beans and water, then let simmer

Add the rinsed/drained beans to the pot and toss them in the tomato and seasonings. Drop in the bay leaves and pour 3 quarts of water into the pot. Turn the flame up high and bring the pot to a rapid boil. A covered pot boils quicker but you’ll need to keep a close eye on the pot to make sure it doesn’t boil over!

Once the liquid boils, turn the flame down low, cover the pot and simmer for 1 hour and 30 minutes. Stir occasionally.

Step 8: Add the chouriço and continue to simmer

When you lift the lid to add the chouriço, you’ll notice that the liquid in the pan has reduced by about a third. Add the chouriço (or linguiça), stir the beans and cover the pot with the lid again. Let cook for another 30 minutes.

Step 9: Taste the broth and add the vegetables

By now, the chouriço should release some flavor into the broth. Uncover the pot and taste the broth (be careful not to burn your tongue). Add more salt and pepper if needed. Add the cabbage, carrots and squash – the liquid should just barely cover the vegetables. If you need to add a tiny bit more of water you can.

Serve the feijoada over white rice and make sure to spoon plenty of that delicious broth over the rice! My family serves feijoada with other dishes as part of a larger meal, but it can be eaten with rice on its own.

You’ll definitely have leftovers so make sure to store any leftover feijoada in the refrigerator for up to 3 days.

Want to try some other traditional Cape Verdean recipes? 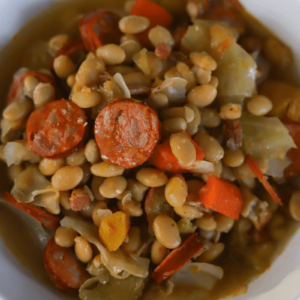