Modje is one of those Cape Verdean foods, that you may not hear about as much as some of the other specialties that are widely eaten in Cabo Verde, like Cachupa and Canja. Don’t let this lead you to believe that this delicious goat stew is any less delicious or comforting, though! you just don’t hear about modje as much because it’s not eaten on all of the other Cape Verdean islands.

Although goat meat is traditionally used in this stew, other variations exist. Lamb is another meat that’s commonly used in modje, but some cooks prefer to use beef or chicken. I personally prefer the flavors of goat and lamb, so that’s why I use both types of meat in my modje.

In speaking with Cape Verdean people from islands outside of São Nicolau, I learned of a similar dish called guisado or carne guisado. From what I know, guisado is a broth-less variant of modje.

Finally, if you’re familiar with Latin American or Caribbean cuisine, you might notice a striking similarity between modje and sancocho, which is a meat-based stew that’s eaten widely throughout Latin America and the Caribbean. In my experience modje is nearly identical to sancocho. Just like modje, sancocho also has several variations, depending on the country or region where it’s prepared.

How much modje does this recipe yield?

Like most Cape Verdean food, modje is often made in very large quantities, as it’s a dish that’s often eaten to celebrate an occasion, or to feed a large family. I scaled the size of this recipe down to about 8 servings.

I know 8 servings sounds like a lot, but iI look forward to having plenty of left-overs. In my opinion, modje tastes even better when you re-heat it the next day. Also, modje is no-one’s light work! It involves a lot of peeling and cutting of vegetables and it simmers slowly for hours. You’ll want to have a decent amount for all of the work that goes into it!

Where to buy goat meat or lamb meat:

When shopping for a specific type of meat, I always have the best luck at a local butcher. I’m not sure why the idea of visiting a butcher seems so daunting at first, but you have a much higher chance of finding exactly what you’re looking for at a butcher shop, versus at a regular grocery store.

Make sure to ask for any cut of goat or lamb that’s suitable for stews (shoulder works well), and make sure it’s cut into cubes. I usually get bone-in meat for modje, but you can also ask for boneless. Also, don’t be afraid to use frozen meat if that’s an option! Frozen works just as well, and it’s usually a few dollars cheaper per pound. You’ll just have to defrost it.

Identifying root vegetables can be tricky even for someone like me who grew up in a home where they were a staple. Below is an image of all of the root vegetables that you’ll need for modje (goat stew). We will start with the obvious ones:

I usually use an acorn squash for modje (shown at the top left corner of the photo above) because they’re so easy to find. Acorn squash is dark green in color on the outside but turns orange as it ripens. Don’t worry if you can’t find a ripe-squash, the green one will work just fine! I also like to use the acorn squash because you can use the whole thing due to its small size.

I really like to use squash in modje because of it’s soft and sweet contrast to other vegetables. It also breaks down and thickens the modje depending on how long you let it cook.

This translates to English potato, not sure why it’s called this in Cape Verde, but it’s just a regular potato that we are used to eating in the US. Russet or Idaho variety works fine.

Not to be confused with plantains, modje traditionally calls for unripe, green bananas. If you have an easier time finding plantains, go for it. Just keep in mind that plantains are bigger and slightly more firm so you won’t need as many and they may take longer to cook.

It can be very easy to confuse yams and sweet potatoes, especially in casual conversation. The United States has a reputation abroad of confusing yams with sweet potatoes, so I’ll make it easy for you.

Inhame (called ñame in spanish) means yam. This variety of yam is often large in size with a papery, brown exterior. It’s surprisingly easy to cut into and has a firm yet slimy texture (don’t worry, the sliminess cooks off). Inhame has a slightly sweet taste.

Just a warning! Be careful when cutting inhame because it can be slimy. You want to make sure you have a good grip on it while cutting. Also avoid touching your face, neck or other parts of your body when you have it on your hands. I personally have broken out by mishandling inhame! Also do not eat raw inhame, it is only safe to be eaten when it’s cooked.

This might be one of the more recognizable root vegetables. I use the words mandioca (Portuguese term) and yuca (Spanish term) interchangeably. Mandioca is a firm, starchy root vegetable with a waxy exterior. Yuca has a grainy texture and a mild taste.

They’re very firm and you’ll have to apply some pressure when you cut them. A big sharp knife is recommended. They are surprisingly easy to peel though. I usually break the mandioca down into 3 or 4-inch chunks, and then split each down the middle. There’s a slight seam where the skin meets the flesh of the yuca. Place the knife under the skin to loosen it from the flesh, and discard the skin.

Batata doce translates to sweet potato which is confusing because we usually think of a brown potato with a sweet orange flesh when we say sweet potato in the United States.

What we refer to as batata doce in the context of Cape Verdean food is a vegetable with a reddish exterior and a slightly yellow flesh. It has a sweet, yet mild taste and can be peeled just like a regular potato.

A few tips and tricks for making modje (goat stew):

How to serve Modje (Goat Stew)

Modje can be eaten as a stand-alone dish, but it’s even more delicious when served with an accompaniment like ralon (yellow grits, pronounced hello-n) or cherem (hominy porridge, if you will). Modje also goes well with a simple side of white rice.

I’m going to go ahead and anticipate the question of whether modje can be frozen. Personally, I don’t recommend freezing modje because I find frozen modje tends to get a bit gummy in texture. I think it may have something to do with the amount of starch in the dish. I personally have not had luck with freezing it.

Did you enjoy this Modje recipe?

If so, let me know in the comments! I would love to hear how you made out with the recipe! Don’t forget that I have an entire collection of Cape Verdean recipes here! 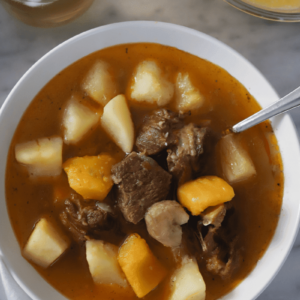