Tres Leches is a very popular Latin American dessert. Traditionally it’s cake that’s soaked in tres leches (sweetened condensed milk, evaporated milk and whole milk or heavy cream). It’s moist (there’s that word!), rich and delicious. If you haven’t tried it in its original form, I suggest you do that before trying this recipe.

This recipe combines elements from both classic cinnamon rolls and tres leches. I’m telling you it works, even with the cream cheese frosting. We’ll get into why I kept the cream cheese frosting later on. Also, cinnamon rolls are thick, doughy, and have layers. Perfect for soaking up tres leches! If you know anything about making cinnamon rolls, you know it’s a process to make them! Making the tres leches adds an additional step but I promise it’s simple and worth it! My suggestion is to use a mixer of some sort, preferably a stand mixer with a dough hook attachment to cut down on some of the work. And don’t make these while you’re hungry because they need to rise for a few hours! I don’t need you guys getting hangry at me!

So let’s get right into it because there are a lot of steps! This recipe takes a good 2.5 to 3 hours from start to finish, and the reason why it takes that much time is because the dough has to rise. Twice. So don’t make these while hungry!

To make these Cinnamon Rolls soaked in Tres Leches, you’ll need the following:

Step 1: Make the dough and let it rise

In this step you’re going to warm the heavy cream and evaporated milk and use the warm mixture to proof your yeast if you’re using active yeast. Be careful that the milk/cream doesn’t get hot, or you’ll kill your yeast. If you’re using instant yeast you can skip the proofing and combine the dry yeast with the flour.

Next, combine the room-temperature eggs and butter with the sugar, yeast, evaporated milk and heavy cream. Mix it well. Add the flour and salt and use a dough hook (or your hands) to form the dough. If you’re using a dough hook the dough is ready once the dough pulls from the sides of the bowl.

Now it’s time to knead the dough by hand and shape it into a ball. Place the ball in a clean, greased bowl, cover it with a kitchen towel and let it rise for an hour and a half. The dough should double in size.

This is where most of the work comes in. After the dough has risen, place it on a lightly floured surface. Punch the dough down and roll it into a large rectangle (12×22 inches).

Make the filling by combining ½ of a cup of dark brown sugar with 3 tablespoons of cinnamon and 1 stick (8 tablespoons) of butter. Mix it until it’s all smooth and spread it over the dough. Leave a ¼ inch border so that you can seal the rolls, and so the filling doesn’t leak out.

Roll the dough tightly with the long edge in front of you. Pull the dough towards you as you roll it. Use floss or a knife to mark where you’re going to cut the rolls. You’ll want to space the markings about 1 and ½ to 2 inches from each other, and end up with 12 rolls. Use floss to cut the rolls. It’s easier and allows the rolls to keep their shape better. If you have to use a knife that’s ok, just make sure that it’s sharp and try not to press down too firmly, otherwise the rolls can lose their shape.

Arrange the rolls in 4 rows of 3, in a 9×13 inch baking dish or cake pan. This is the sized baking dish that I have best results with. The cinnamon rolls can touch each other but leave some space between each row so that they have room to spread. Also, you want to use a dish or pan that has deep sides as shown below, because the cinnamon rolls will get taller as they rise.

Step 3: Let the Cinnamon Rolls rise for a second time

So by this time, people usually start to get hungry and their patience starts to wear off. Word of advice, don’t make these on an empty stomach. You don’t want to rush the second rise! Sometimes I’ll make and assemble the rolls the night before and keep them in the refrigerator overnight and then let them rise in the morning. Normally though I’ll just make them from start to finish in one shot.

This is what they look like after they rise for about 2 hours in a warm oven. Before I roll out the dough, I put my oven on the “warm” setting (about 170°F). After I arrange the rolls in the baking dish, I cover it with a towel, place them in the warmed oven and turn the oven off. I’ll let the cinnamon rolls rise in there for 1-2 hours.

After the cinnamon rolls have risen, bake them in a preheated oven at 375°F for 18 minutes. After 18 minutes, brush them with warm melted butter mixed with 2 teaspoons of sugar, return them to the oven and bake them for another 5 minutes. They should be slightly golden in color like in the photo below.

If you can get them darker within the 23 minute time-frame more power to you, but this is the best I could do without over-baking them!

You can either start this step while the cinnamon rolls are baking or do it as they cool. Your choice.

To make the tres leches, combine evaporated milk, heavy cream, condensed milk and vanilla extract in a liquid measuring cup using a whisk. Set it aside until the cinnamon rolls are ready.

To make the cream cheese frosting, beat the softened cream cheese with a few tablespoons of condensed milk and a teaspoon of vanilla extract. Add the powdered sugar and continue to beat it until the frosting is smooth and creamy. Add the heavy cream last, and beat the frosting for another 2-3 minutes on high speed.

Last and final step: Soak the rolls and frost them!

Finally getting to the good part! Wasn’t this fun?! It’s time to poke our holes and pour the tres leches over the cinnamon rolls! I let mine soak for about 10-15 minutes, you can let them soak longer if you want.

Cinnamon rolls are perfect for soaking in tres leches, look at all those crevices! The enriched dough really stands up the tres leches without turning into mush.

Now we’re gonna frost the sh*t out of them. I was being wimpy with the frosting in the photo below, but I promise you, I layer that frosting on! This recipe yields plenty!

And now, we’re gonna eat our hearts out.

A close-up of this beauty: 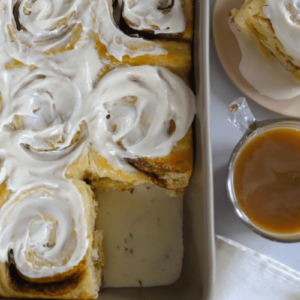 Soak and frost the cinnamon rolls

Calories: 300kcal
Tried this Recipe?Let us know how it was!

Are you looking for more irresistible sweets? Check these out!

And don’t forget to save this recipe on Pinterest!