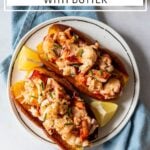 The Connecticut lobster roll is a famous New England tradition made from tender and juicy lobster meat dripping in hot butter. It sits on a grilled brioche split-top bun and is topped with fresh herbs and a squeeze of lemon. Serve it for lunch or dinner with a bowl of classic New England clam chowder!

I love my lobster rolls hot, dripping with butter with a side of delicious creamy coleslaw! This is a lobster roll in it’s most simple form!

Here in New England, we have two rivals when it comes to lobster rolls. There’s the classic Maine lobster roll, which is undoubtedly the most famous of the two. It’s lobster chunks tossed in mayo with pieces of chopped celery and a little salt and pepper.

Then you have my favorite, the Connecticut style lobster roll, which is as simple as it comes. Chunks of tender, sweet lobster meat that’s tossed in hot butter with herbs (usually parsley or chives).

Both styles of rolls are served on grilled split top hotdog buns with a squeeze of fresh lemon. The Maine style roll unfairly gets referred to as the classic. What is more classic than lobster meat in hot butter? I digress.

Refer to the recipe card for quantities and exact measurements.

If you’re just using lobster tails, you can use a smaller pot and shorten the boiling time to 10 minutes. Transfer the lobster tails to an ice bath just like you would if you were boiling whole lobsters.

Tip: The lobsters will turn bright red and the tails will curl as they cook. The ice-water bath stops them from cooking in their shells, which can make the meat tough.

Separate the claws from the bodies by twisting them off. Use a nut cracker to break the claws (or a hammer in my case) and make sure to reserve the claw meat and the knuckle meat!

Twist the tails off of the bodies and run them under cold water to clean them. Make sure to rinse the cavity of the tail thoroughly. You don’t want any of the green/yellow stuff left on the tails (which is the pancreas and liver by the way).

I find that it’s easiest to use kitchen shears to cut along the front and back of the tails. Don’t worry if your shears leave marks. You’re going to chop the lobster into chunks anyway.

Using a kitchen knife, chop the lobster meat up into bite-sized chunks and place in a mixing bowl. Then chop the parsley, chives and fresh tarragon if you haven’t already. Keep the chopped herbs separate from the lobster meat.

Melt 2 tablespoons of butter in a cast iron skillet or griddle. Spread the brioche buns open and lay them flat on the skillet. Grill them for 1-2 minutes on each side. Keep the buns in a warm oven (170°F) while you prepare the lobster meat.

Tip: Some split-top buns may be hard to press flat without breaking. If this is the case, just grill the outsides of the bun.

Cut the stick of butter in half and place both halves in a clean skillet. Melt the butter over medium-low heat. Once the butter melts completely, mix in the chopped parsley and tarragon.

Add the lobster meat to the pan and toss it in the hot butter. Season with black pepper to taste and turn the flame off.

Divide the lobster meat between the 4 buns and top off each lobster roll with fresh chives and a squeeze of fresh lemon! Serve them right away with extra melted butter and lemon wedges on the side.

Here are some side dishes and alternate ways to serve these lobster rolls:

Keep leftover lobster meat in the refrigerator for up to 3 days. Reheat it by tossing it with some melted butter in a hot skillet. If it already has butter on it, just reheat it in a warm skillet. Do not microwave it or it will turn rubbery!

You may find these helpful: 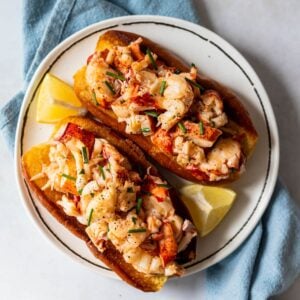