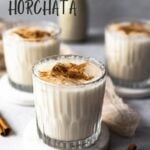 There’s nothing more delicious than a cold glass of horchata and some golden, fried churros! I have a fantastic recipe for churros with dulce de leche – check it out here! Horchata and churros make the perfect match!

Horchata (pronounced or-chah-tah) is a plant-based drink that’s popular in Spain, Mexico, throughout Latin America and in parts of Africa. It’s often made by soaking grains, nuts or seeds in water, straining the liquid and mixing it with milk, sweetener and spices.

This rice-based version of horchata originated in Mexico. Also referred to as ‘agua de horchata’, it belongs to a family of drinks called ‘aguas frescas’ which are chilled beverages that are extracted from fruit, vegetables, nuts or grains.

There are so many variations of horchata, I list just a few further down in this post!

Here’s a list of everything you’ll need to make agua de horchata! Refer to the recipe card at the bottom of this post for quantities and exact measurements.

You won’t need anything fancy, but these tools are highly recommended:

Just a quick note: I usually skip the cheesecloth/nut-milk bag, but that’s because I don’t mind a little graininess! Lean on your preference.

How to make agua de horchata – step by step

Steps 1 and 2: Rinse and soak your rice overnight

Rinse the rice thoroughly and place it in a large bowl. Add the cinnamon sticks and fill the bowl with 4 cups of water. Cover the bowl with plastic wrap and keep it in the refrigerator overnight, or for a minimum of 4 hours.

Note: as you see here, I used Mexican cinnamon but you can use regular. I broke the cinnamon to release a little extra spice, but you don’t have to.

Transfer the soaked rice, cinnamon and water to a blender. Pulse on high speed for 1 full minute. You’ll need to work in batches if your blender isn’t large enough to hold all the liquid at once.

Step 4: Strain the rice and liquid

Pour the liquid through a mesh strainer into a pitcher or bowl. Use a rubber spatula to scrape all the rice from the bottom of the blender. The rice should be very grainy at this point and contain specks of cinnamon. It may even resemble a paste.

Use your spatula to press all of the liquid out of the rice and through the strainer. If you want to line your strainer with a cheesecloth you can, this will make the horchata extra smooth. You can also use a nut-milk bag for this step and squeeze the liquid from the bag using your hands.

Add 1 can of sweetened condensed milk and 1 can of evaporated milk to the bowl/pitcher. Add the vanilla extract and stir.

If you used a bowl to mix the horchata transfer it to a large carafe or another type of vessel that’s easy to pour from.

For a lighter version of horchata, serving over ice is recommended as the ice will dilute it slightly.

As I mentioned, there are so many variations of horchata! Here are just a few:

Horchata’s shelf life is about 4 days. Store it in the refrigerator and shake or stir before serving. 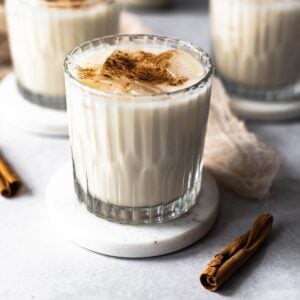 Just a few tips for you!