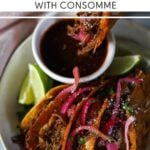 This post may include Amazon links. As an Amazon Associate I earn from qualifying purchases.

To this day, the concept of fried, cheesy tacos that you dip in sauce still blows my mind. This recipe will activate every one of your tastebuds, especially when paired with this recipe for delicious aguas frescas !

Consommé is a vital part of this recipe and largely responsible for the virality of quesabirria! It’s a concentrated broth that’s released from the meat as it cooks.

The consommé is reserved to dip the tortillas in prior to frying. When we’re done frying and assembling the tacos we’ll serve the rest of consommé on the side as a dipping sauce!

Before we get all crazed and excited like we tend to do on the internet, let’s understand the origins of Birria. It’s not a new concept, it’s actually a Mexican stew that’s traditionally made with goat meat. Read more about its origins here.

Birria tacos have only recently become popular in the US, but are said to have origins in Tijuana. They’re folded corn tortillas that are filled with shredded beef, melted cheese and then fried.

Quesabirria can be described as a cross between a quesadilla and a taco.

This is quite the list of ingredients, but necessary since the flavors in Birria are complex. Refer the recipe card for exact measurements and quantities.

How to make birria tacos with consommé

Rub or brush your meat with salt, pepper, chipotle powder, smoked paprika, and crushed garlic. You can add a small amount of oil to help spread the seasonings.

Add the bay leaves and cover the bowl in plastic wrap. Let the meat marinate overnight or at least 2 hours minimum.

Heat 1-2 tablespoons of cooking oil in a cast iron skillet over medium-high heat. Transfer the roast to the skillet and sear the roast on all sides. You can use the sauté function on your pressure cooker for this step if you’ll be using one.

This is key to a good sear is leaving the roast in tact so that the beef doesn’t release much liquid. The meat will release itself from the pan when it’s ready to be flipped.

Once the beef is slightly charred on all sides, remove it from the skillet (or pan) and slice it into 4 large pieces. I do this so that I can cover the roast easily without having to add too much liquid to the pot.

Deglaze the skillet or pan with a splash of beef broth over medium flame. Use a whisk or wooden spoon to loosen the bits left behind from the roast. Once the liquid simmers and most of the bits are released, proceed to the next step.

Place the roast in the dutch oven or pressure cooker and pour the deglaze liquid over it. Add the quartered onions, tomatoes, cinnamon stick and chili peppers.

Pour the deglaze-liquid into the pot, and add enough broth to cover the meat, onions and peppers (about 2-3 cups). Bring the pot to a boil, lower the heat and let simmer for 1 hour (or 15-20 minutes in a pressure cooker).

Once this step is done, the meat and vegetables should look like the image on the right.

Add the cumin, cloves, sugar, vinegar, oregano, lime juice and a little cooking liquid to the blender and pulse for about a minute.

Preheat the oven to 325°F. Place the meat back in the pot and strain the puree over the meat using a mesh strainer. Discard any bits that are left behind in the strainer.

Top the meat off with just enough broth to cover it. Taste the liquid and add more salt if needed.

If you’re using a pressure cooker, you can cook it on the same pressure-cook setting for about 45 minutes to an hour.

Once the meat is done, remove it from the pan and transfer to a cutting board. The meat should be tender enough where all you need to do is apply a little pressure with a fork to break it apart.

Leave the consommé in the dutch oven or pressure cooker, so you can dip the tortillas in when it’s time to assemble the Birria tacos.

Step 8: Prep the toppings before assembling the tacos

To make the pickled onions, slice the red onions and place them in a mason jar or small bowl. Pour 1 cup of boiling water, ¼ cup of apple cider vinegar and sprinkle 2-3 tablespoons of sugar over the onions and cover them. Let them seep for about 10 minutes and drain them.

Cut the fresh limes into wedges and chop your cilantro. Shred the monterey jack cheese and set it aside.

Step 9: Fry and assemble the tacos

This step requires the most patience and practice. If you don’t dip quickly the tortillas can absorb too much liquid and fall apart. Have a few extra tortillas on hand in case you mess up.

Heat a greased non-stick skillet over medium heat. Dip one tortilla at a time into the consommé and then place it in the skillet or frying pan.

You’ll notice the edges of the tortillas start to lift once they become firm. If you’re able to get your spatula under the tortilla and lift with very little resistance then it’s ready to be flipped. Flip and repeat this same process for the other side.

Add your desired amount of beef and shredded cheese to the center of the tortilla. Don’t over-stuff! Once the tortilla has crisped slightly, fold it over to create a taco and let it get crispy on both sides. The tacos might get a little dark in color, but that’s ok!

You can serve the birria tacos as you fry them, or you can arrange them on a large baking sheet and keep them warm in the oven until you’re ready to serve them all.

Assemble them on a platter prior to serving and top with pickled onions, chopped cilantro, a sprinkle of cotija cheese, a few lime wedges and a side of consommé.

What to serve with Birria tacos

Birria tacos (or quesabirria) are a meal on their own but they can also be served with rice, beans or either of the recipes listed below! 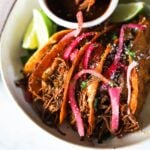 To season the beef