Make room for your new favorite side dish! Cornbread stuffing is the perfect combination of sweet and savory, and it’s such an easy recipe to make! This dish starts with fresh baked cornbread as the base, and its combined with 1 egg, chicken broth, sauteed onions, celery, sage, and savory Italian sausage. It has a slightly dense, almost custard-like texture that’s nice and toasty on top.

Because my dad taught me better, I have to state that technically we shouldn’t be calling this dish stuffing, because we aren’t using it to stuff anything (and I don’t recommend that you do). What we should be calling it is cornbread dressing. I think of cornbread ‘stuffing’ like it’s street name. Wait, did I just give one of my recipes a street name?!

And if you think I’m the type of person who reserves my cornbread stuffing recipe only for the holidays, you would be wrong. I make this dish year-round because I am a stuffing fanatic.

What you’ll need for this cornbread stuffing recipe:

Can I use store-bought cornbread?

Absolutely. In fact, I recommend using store-bought cornbread if you’re going to be doubling or tripling the recipe, so you’re not having to bake several pans of cornbread. This recipe calls for two 8-inch pans (either 8×8 or 8-inch round) of cornbread. Try to keep these portions in mind as you’re subbing the cornbread in the recipe with store-bought.

If you’re using store-bought you can skip to step 2 of the recipe.

How much does this recipe yield and can I double it?

This cornbread stuffing recipe yields enough for about 4-6 people if you’re consuming it as modestly-portioned side. I would absolutely recommend doubling this recipe if you’re serving more people or if you know that this recipe is going to be a hit (which it will!), or if you want to ensure plenty of left-overs.

Why boxed cornbread mix versus from scratch?

Boxed cornbread is one of those things that is so tasty on its own, that I never cared to mess with it. Oh and it’s convenient. I normally don’t like to mention brands, but in this case I think it’s important to mention because the cornbread measurements and directions in this recipe come directly from the instructions on the box. If you’re using a different brand, I would adjust the cornbread measurements and baking directions accordingly.

Also, cornbread and corn muffin mix are exactly the same. You won’t need a muffin tin, just two 8-inch round or square pans.

Do I have to add sausage?

No way. Although I love the taste that the sausage gives this dish, it is perfectly fine to make it without. I’ve made it plenty of times without meat and it’s still delicious and full of flavor, thanks to the chicken broth.

If you don’t want to use chicken broth, vegetable broth would work just as well.

Can I stuff a bird with this cornbread stuffing?

Placing stuffing inside of an actual bird is a little controversial from what I’ve heard, but I’m not against it. I don’t however, recommend doing that with this recipe because of its soft, almost creamy texture.

I honestly don’t know how this would cook if you baked it inside of a bird, so for that reason I can’t recommend it. I like the toasty layer on top and I think it would be hard to achieve that if it were baking in a bird’s cavity versus in a baking dish. I’m all about not fixing something that ain’t broke.

If you have your heart set on stuffing your bird with this stuff, then by all means go for it and please let me know how it comes out!

Literally, my instructions for making the cornbread come directly from the package. Place the cornbread mix, 2 eggs and milk right into the bowl and mix everything until a batter forms. The batter will be lumpy, and that’s perfectly ok.

Grease 2 baking pans and divide the batter between them. Bake the cornbread in the oven at 400°F for 20-25 minutes. While your cornbread is baking/cooling, you can begin to prep your other ingredients by moving along to the next step.

Step 2: Prepare the rest of the ingredients

Place the sausages in a small saucepan and fill the pan with enough water to cover the sausages. If you’re using ground sausage or sausage patties then you can skip this step.

While the sausages are boiling, chop the onions, celery and sage. Once the sausages have coked, remove them from the pan and transfer them to a cutting board. Let them cool slightly and chop the sausage into small pieces.

Step 3: Saute the meat and vegetables

Melt the butter in a large skillet and then add the sausage, onions, celery and ground sage. Season the mixture with some salt and pepper and saute everything until the onions and sage become fragrant and the celery and sausage is browned.

Step 4: Combine all of the ingredients

Once you’ve sauteed the sausage and aromatics, turn the burner off and let the skillet sit for for a minute while you cut the cornbread into 1 inch cubes. Combine the cornbread with the onions, sausage, celery and sage in a large mixing bowl. Taste the mixture and add more salt and pepper if needed.

Add the remaining egg and the chicken broth, and mix everything together until all the ingredients are evenly combined. The stuffing will appear thick and moist like the photo below. Spread the cornbread stuffing into a 2-quart glass baking dish. Try to spread it out in an even layer, but don’t feel like you need to pack it down.

Bake the cornbread stuffing uncovered in the oven at 375°F for 20 minutes. If you doubled the recipe, I would suggest baking the stuffing for 25-30 minutes, but in a slightly larger baking dish (3 quart is the next size up if you’re using a glass casserole dish like this one).

The stuffing should become golden brown and be slightly toasted on top, with a creamy but set texture throughout. It should be soft enough where you can scoop it with a spoon.

The end result is rich, sweet and savory cornbread stuffing with a creamy texture and a toasted top-layer. Believe me when I tell you that you’ll be hooked on this dish year-round!

Here are a few more holiday sides that you’ll love: 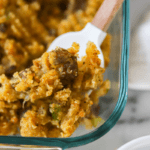 This easy cornbread stuffing recipe is the perfect balance of sweet and savory with a toasty top-layer and creamy texture throughout! Fresh baked cornbread makes the base of this dish and its flavored with sauteed onions, celery, sage and savory Italian sausage.