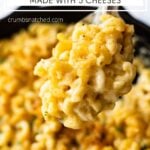 One skillet, 5 cheeses, 30 minutes! This easy, baked cast iron mac and cheese is made from a blend of white cheddar, gouda, mozzarella, colby-jack and Velveeta! Yields 6 rich, creamy servings!

Why you’ll love this recipe

This mac and cheese comes together so quickly! The cheese sauce is prepared in the same skillet that the mac and cheese is baked in, and contains 5 different cheeses!

Feel free to switch up the cheeses or omit what you don’t have on hand.

Can you make baked mac and cheese in a cast iron skillet?

Absolutely! What’s great about cast iron is that you can use it on the stovetop to make the sauce and then bake the assembled mac and cheese in the oven.

Is this a one-pot recipe?

Technically no, because the macaroni is boiled in a separate pot. However, all of the other recipe steps are performed in the same skillet.

Yes, it’s important to boil the water before for adding the macaroni. The longer the macaroni sits in water, the less al-dente it will be.

Why does the macaroni have to be al-dente?

The term al-dente describes pasta that is ‘firm to the bite’ in Italian. Aside from personal preference, the macaroni is cooked al-dente for practical reasons. It needs to hold up to being mixed into the heavy cheese sauce.

Don’t worry if there’s an ingredient that you’re missing on this list! Substitutes are listed further down in the post.

Refer to the recipe card for exact measurements.

Serve the mac and cheese on its own or as a side with these other dishes:

You don’t have to use all of the cheeses listed. If you’re missing one, just double up on one of the others!

Store leftover mac and cheese in the refrigerator in an airtight container. Reheat in the oven at 350°F for 10-20 minutes or until hot throughout.

For best results, here are some tips: 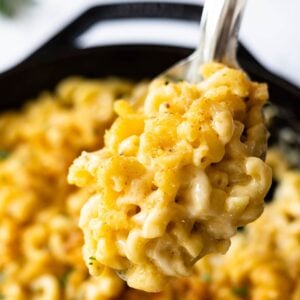