Just when I thought things couldn’t get better than an all-butter crust, I took the advice of baking experts and combined butter with shortening. Oh.my.goodness. Why didn’t I try this sooner?! This tender, flaky, butter and shortening pie crust is perfection! It has the delicious flavor of an all-butter pie crust, but the shortening adds a tenderness that can’t be matched! What I love about using shortening is that it’s way more forgiving to work with than all-butter, believe me.

Why is shortening easier to work with than butter?

Butter can be tricky to work with because it melts super-fast, making the pie dough very fragile and hard to roll out if you’re not careful to keep it cool at all times. Shortening is shelf-stable and retains all of its properties at room temperature. Because shortening is so stable, it doesn’t melt without the presence of high heat. This allows the dough to remain in tact and makes it much easier to work with. Shortening also creates more flaky layers since the fat stays in-tact longer.

Bear in mind that this pie crust recipe uses a combination of butter and chilled shortening so you still have to try to keep the dough as cool as possible, but if it does start to feel a little warm just pop it in the fridge until it firms up again. Your pie crust will still be tender and flaky. In my opinion, pie crust made with shortening is pretty hard to mess up!

So why add butter to the pie-crust, then?

This answer is literally easy as pie. The flavor of butter is unmatched. Period. Everyone loves the rich and salty flavor of butter. And yes, I recommend using salted butter in pie crust, for tastier results. So in short, this recipe uses shortening for its properties, and butter for flavor. I’ll never make claims that using shortening is healthy, but how often are you really going to have the motivation to bake an entire pie crust from scratch?

How much pie crust does this recipe yield?

First, you’ll want to measure out all ingredients and keep them within arm’s reach. Since we are aiming to keep the ingredients as cold as possible, you don’t want to be scrambling around the kitchen to locate ingredients as you go.

I also like to shred my frozen stick of butter with a box grater before mixing it with the dry ingredients. Shredding the butter makes it much easier to cut the butter and shortening into the flour.

Lastly, add about 3 ice cubes and apple cider vinegar to the cold water and let it sit while you’re combining the butter and shortening with the dry ingredients. Ice cold water will help to keep the dough nice and cold.

Whisk together the flour, salt, and sugar, and move along to the next step. I like to use a 7.5 quart steel mixing bowl, which leaves me plenty of room to mix without making a mess.

Step 3: Combine the fat with the dry ingredients

Step 4: Add the water in slowly and form a ball

I usually start off by digging a little well in the middle of the fat and flour mixture. Then I’ll pour a small amount of water into the well and push the flour into the middle to create a ball. Add more water (a few tablespoons at a time) and you should be able to form your dough into a loose ball. The dough should feel damp and tacky but not wet.

Three-quarters of a cup of water with a few ice cubes always seems to do the trick for me. If your dough seems too wet and sticky, try adding a few more tablespoons of flour. As mentioned above, you should be able to form the dough into a loose ball, like the one pictured below.

Using a dough scraper, divide the ball of dough into 2, and form each half into a round disc. Wrap each disc in plastic wrap and let the dough rest in the refrigerator for 1.5 to 2 full hours. This is a very important step because it allows the gluten to relax and the fat to firm up again. Relaxed gluten yields a tough crust.

If you shorten the resting period you will end up with a shrunken pie crust, so it’s important not to take any shortcuts with letting your dough rest in the refrigerator.

Step 6: Roll the dough and transfer to a pie plate

I don’t know about you, but this is my favorite part. Before rolling out the dough, generously flour your surface with a few tablespoons of flour. Then flour your rolling pin and roll the dough out to a 12-inch circle. As you can see, it doesn’t have to be a perfect circle, but try to get it as round as you can.

Unroll the dough over a glass pie plate and ease the dough into the plate. Trim any excess dough so that it extends about a half-inch past the rim of the pie plate and tuck the excess under.

If your pie crust recipe calls for a single crust, crimp the edges by pinching one of your index fingers between your thumb and your other index finger, and dock the pie crust. Docking is when you poke holes in the bottom of the pie shell using a fork, so that steam escapes while baking. I always dock my pie shells.

I know this is getting annoying but I promise you, you’ll want to let the pie shell get cold again. This prevents it from shrinking or warping while you bake it. I let my pie shell chill for another 45 minutes in the refrigerator before filling it or blind-baking, but some people stick it in the freezer for 15-20 minutes, which also works.

Step 8: Fill the pie and blind-bake if needed

If you’re not familiar with blind-baking, the photo below might look a little weird to you. Blind baking is when you fill your pie shell with weights (or in my case dried beans) and let it partially or fully bake before adding the filling. I have a whole lesson on blind baking here.

Generally, only single-crust, custard pies or no-bake pies require a blind bake. Your pie recipe should specify whether blind-baking is required.

If your pie doesn’t require a blind bake, fill it with your pie filling, roll out your top crust and crimp the edges like I explained in step 6. The pie in the photo below is topped with lattice which is made by cutting your top-crust into 1-inch strips and weaving it. My apple pie recipe will explain how to do this.

I always brush my pie with egg wash (1 tablespoon of milk plus 1 egg yolk) prior to baking it so it develops a nice golden-brown color. Your pie recipe should give instructions on how to do this. Bake the pie according to the pie recipe that you’re using.

Brace yourself for the most tender, flaky and delicious golden-brown pie crust. I realize this recipe has a lot of steps, but if you follow them, this recipe is pretty much fool-proof. I’ve never messed up a pie crust that uses shortening! I can’t say the same for an all-butter crust!

Here’s a peek at what this butter and shortening pie crust looks like! It slices so easily because of how tender and flaky it is! Stick with this recipe and I promise you’ll never be mad at pie crust again! 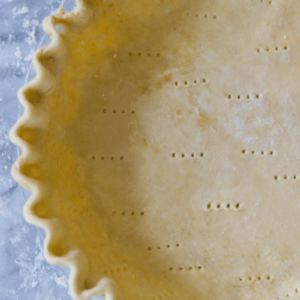 Docking is when you pierce the bottom and sides of your pie crust with a fork to allow steam to escape while baking. Fluting is when you use your thumb and both index fingers to form v shapes around the perimeter of your pie shell. You can also finish your pie edge by pressing the perimeter of the pie with tines of a fork.
Tried this Recipe?Let us know how it was!
« Cape Verdean Sweet Potato Gufong (Gufonginho)
Ponche de Coco – Cape Verdean Coconut Cocktail »
536 shares